Elenger is the most competitive large scale company in Estonia 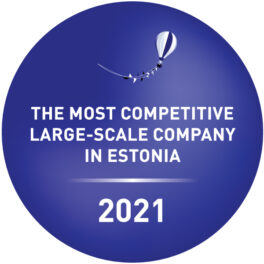 Ants Noot, Chairman of the Management Board of Eesti Gaas, says that the good results are due to the consistent work of expanding the business portfolio over the last 3-4 years. “We were the first to offer a renewable version of natural gas at our filling stations, biomethane of domestic origin, which our sister company already produces in three biogas plants in Estonia,” he gives an example. The company has also been operating in the field of solar energy for several years, building parks both for its own production and for customers.

Eesti Gaas has been the first and only company in the entire Baltic region to have developed stable LNG supply and bunkering capabilities and has become the leading designer and builder of pipelines and gas infrastructure in Estonia.

However, the rapid growth in numbers has come primarily due to the successful expansion to Latvia, Lithuania and especially Finland, where Elenger – the international name of Eesti Gaas – has gained a considerable market share in natural gas sales. More than 60% of the Group’s sales volume already comes from outside Estonia, and the magical limit of 10 TWh is not far away.

In the coming years, Eesti Gaas plans to further expand geographically and increase its renewable energy portfolio. Considering the green goals of Estonia and the EU, there are growth opportunities in both solar and wind energy, as well as in the field of biomethane. This autumn, the company’s brand new LNG bunker vessel will start serving all environmentally friendly vessels in the Baltic Sea region.

The use and importance of natural gas, the traditional core product of Eesti Gaas, will also increase in the coming years. “The current rise in gas prices is an extraordinary and presumably temporary anomaly. In the perspective of 20-30 years, natural gas is the best partner for renewable energy due to its low emissions and reasonable price compared to alternatives, playing an important role in the green turn of Estonia and Europe,” believes Ants Noot.