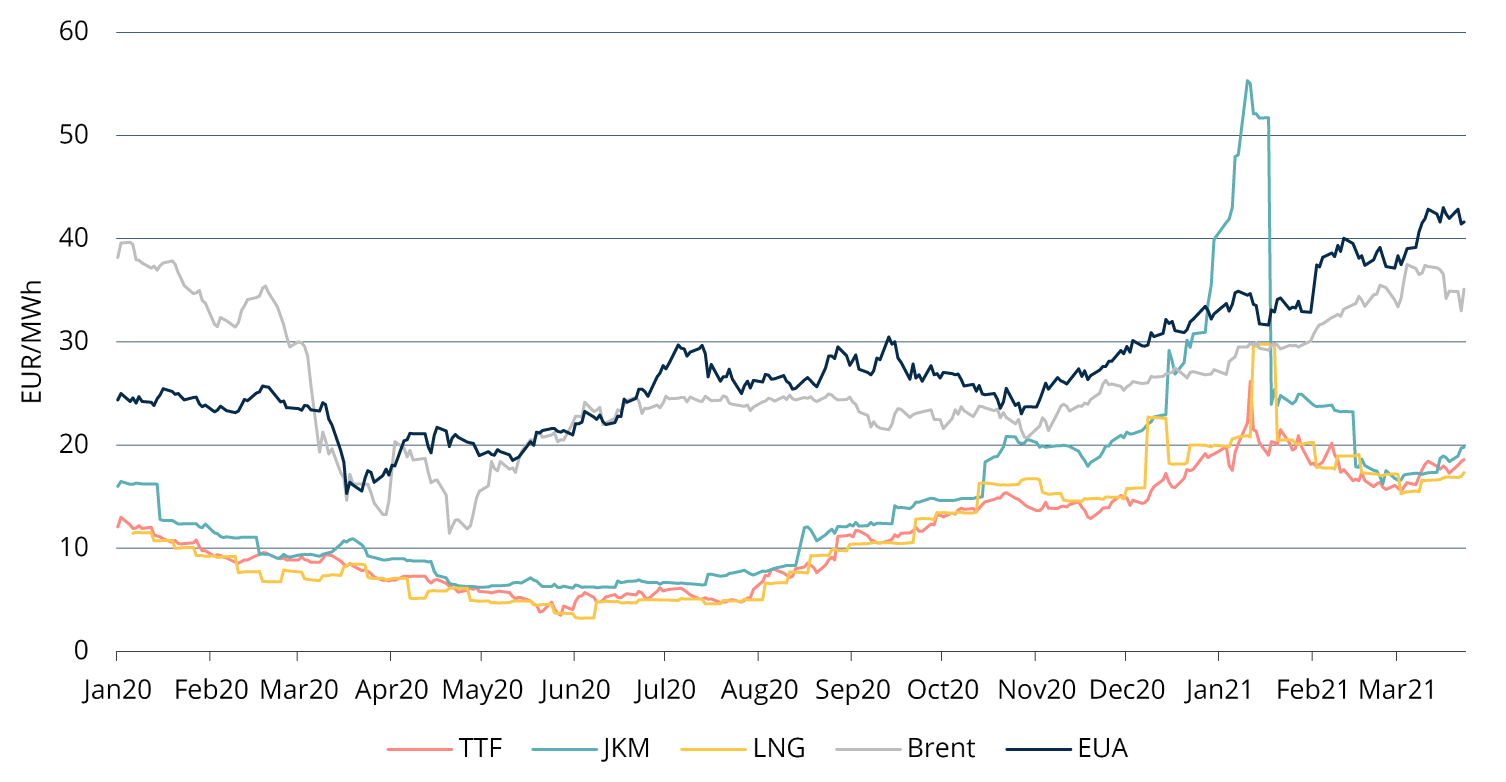 2021 started with a cold spell in Europe which translated into higher gas prices. This resulted in an average European benchmark TTF price of 17.97 EUR/MWh in Q1 2021, a 57% increase compared to the same period in 2020. This has shaped the price dynamic in the first quarter as well as will continue to do so for the rest of the year.

A trifecta of factors in Asia is putting upwards pressure on European prices as well. Firstly, not only Europe but also northeast Asia experienced much colder weather compared to the previous year, which created a lot of heating demand in the first months of the year. Secondly, the region is showing strong economic recovery coming out of the COVID-crisis. For example, China’s GDP grew 6.5% year-on-year in Q4 of 2020. This is in comparison to a period before the virus started to have an impact on the economy. 6.5% is faster than the roughly 6.0% growth before the crisis and surpassing analyst estimates. Thirdly, China is following the example of the west in taking a more and more clear direction towards sustainability. In autumn, China announced its target to achieve carbon neutrality by 2060 and to achieve CO2 emissions peaks before 2030. In the shorter term, this could push China to use more natural gas instead of more heavily polluting coal.

Europe competes with Asia for LNG

The above-mentioned factors cause Europe to compete with Asia in LNG shipments. In early January, this reached an extreme when during a cold period the northeast Asian benchmark index JKM (Japan Korea Marker) surged to a record high of around 58 EUR/MWh. This in turn caused LNG shipments to be diverted from Europe to Asia and prompted a spike up in European prices as well to retain the supply. The situation normalised within days as both TTF and JKM pulled back lower quickly. For now, the market is in balance and the spreads between the two indices are at historically normal levels but Asian demand for LNG is likely to continue to impact European prices moving forward.

The cold winter has caused steep withdrawals from European storages. This is in stark contrast to last season when the winter temperatures were very mild and storage inventories stood at record highs which reduced injection demand in the summer and therefore pushed prices down. Now, despite coming from the high inventories, these have been depleted significantly this winter and therefore need to be restored in the summer. This is likely to continue to support prices at least for the summer period.

Other factors that could keep gas prices high include the rising oil and carbon market and possible Nordstream 2 sanctions. CO2 emission allowances’ prices (EUAs) are in an uptrend making it relatively more expensive to use coal or oil shale whilst having a milder effect on gas because of its lower emissions, which could increase the attractiveness of natural gas as an energy source. President Joe Biden’s administration has expressed strong resistance to the completion of Nordstream 2 pipeline, which if stalled could limit the pipeline supply of gas to western Europe and would thus also directly impact the prices in the Baltic region. The possible downside risks are mostly connected to the chance that global economic conditions may develop weaker than expected or if in the second half of the year winter weather forecasts predict mild temperatures.