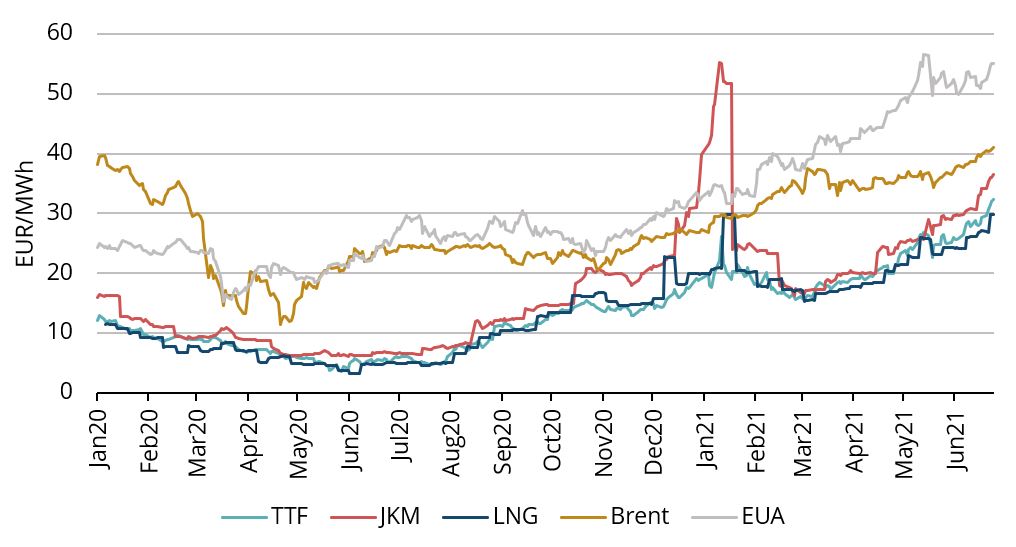 Below average temperatures in Europe during most of spring raised natural gas demand and thereby kept the prices high. This resulted in an average European benchmark TTF price of 20.98 EUR/MWh in Q2 2021, a remarkable 219% increase compared to the same period in 2020 when prices were suppressed due to ample supply and virus concerns. High demand in the second quarter is likely to have a strong influence on prices for the rest of the year. The relatively high levels are more likely to remain and continue higher due to more factors supporting the price.

By the end of Q1, gas storages in Europe had been depleted substantially following a cold winter. The situation was amplified when relatively low temperatures continued in spring and caused a higher than expected demand for heating, pushing up prices and diverting flows directly to consumption that could have otherwise gone towards restocking the inventories. This in turn meant that storages that were already significantly lower than in the previous two years, were not able to be started refilling in late-March or early-April as normal but the bottom in storage inventories came only about a month later. Now, suppliers across Europe are in more of a hurry to ensure security of supply and inject the needed inventories. This puts further upside pressure on the gas prices going forward. 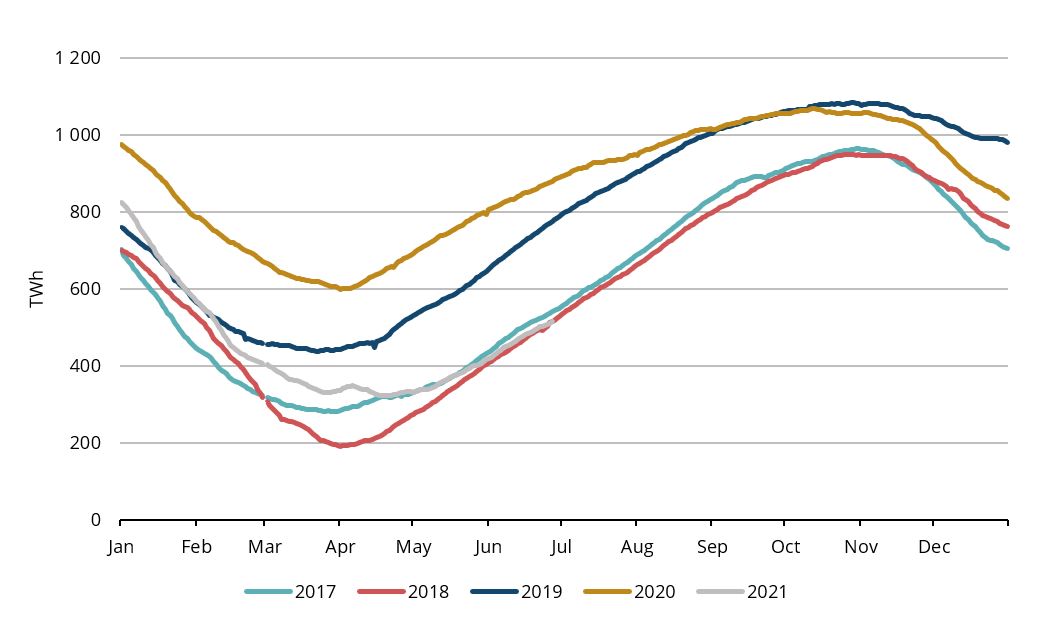 There continues to be substantial demand from Asia for LNG. Europe must compete for that LNG by bidding sufficiently high prices. In recent months, despite the rising prices in Europe, the Asian indices, such as the benchmark JKM (Japan-Korea Marker), has risen even more. This has caused a sharp drop in LNG shipments to Europe as sellers get better prices from Asia. On the backdrop of the previously discussed low storage situation, Europe needs those shipments, so prices in our region also need to continuously catch up, pushing prices further up. At the end of Q2, TTF forward contract for 2022 is trading at around 24 EUR/MWh, roughly 70% higher than a year ago.

A large theme unfolding on the global financial markets is the so called “return-to-normal” trade. After about a year of shutdowns the world is opening up again bringing along a surge in economic activity. This results in various linked effects. First, is the general rise in demand, bringing about a rapidly growing need for fuels, materials, and goods, especially when looking at it from a year-on-year basis. Secondly, due to the shutdowns, production and service capacities have been reduced and rebuilding the supply takes more time than restoring demand. This shortage of supply is evident in all kinds of industries from microchips to packaging materials. Thirdly, this demand-supply imbalance pushes up prices and brings along a surge in inflation. It is typical that in times of inflation and fast economic growth, commodities are the asset class that tends to rise the most. Thus, in the last 12 months, crude oil and gasoline have risen nearly 100%, coal more than 120%, and copper and aluminium about 60%. As natural gas is substitute goods with other energy sources, then a uniform rise in other energies inevitably lifts gas prices, on top of other aforementioned factors.