Year ends with steep peak and drop in gas price

2021 ends with a rollercoaster in gas prices 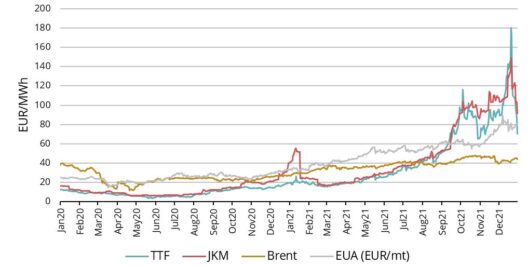 In Q4 2021, the average European natural gas benchmark TTF price was 79.47 EUR/MWh, a 6x increase over the same quarter the year before. TTF forward price for 2022 on the last day of 2021 was trading at around 63 EUR/MWh but has rebounded higher in the first days of 2022. Prices for Q2 and Q3 2022, which previously traded much lower than the ongoing winter at around 30 EUR/MWh, also climbed during Q4 2021 and are now almost as high as the winter months at around 80 EUR/MWh.

Gas prices ended the already extreme year with even more volatility with a rollercoaster price action throughout the fourth quarter. Q4 started with a huge price surge in TTF front month prices hitting an intraday high of 162 EUR/MWh in the first week of October, followed by a relief decline to around 60 EUR/MWh by the end of the month, as market participants did not believe the high prices to be sustainable for consumers. Prices resumed their rise in November and culminated with a new high and closing price of over 180 EUR/MWh just a few days before Christmas, followed by another steep crash to around 65 EUR/MWh on the last day of the year.

Hope and fear over Russian supply drove sentiment in Q4 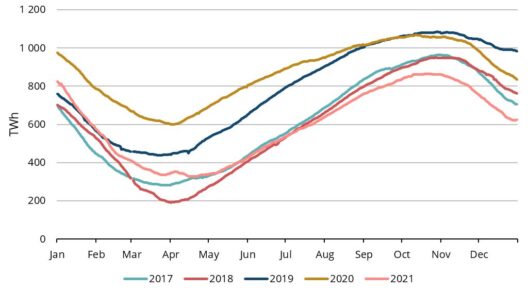 The initial price decline after the early-October peak was helped by comments from Russia regarding its own domestic storages being nearly filled. This signalled the market of the possibility of a much-needed supply increase towards Europe as European own inventories stood at historically low levels ahead of winter (see figure 2 below). This, however, did not materialise as expected and conversely the sentiment shifted entirely in mid-November when the German energy regulator suspended the licencing process of the Nord Stream 2 pipeline on account of it not being operated by a German entity. Nord Stream 2 AG (a Swiss company) shortly announced it is creating a German subsidiary and re-applying. Still, this news delayed the launch process by months and suffocated any hope of the new pipeline coming online in time to help with the scarcity this winter, launching a year-end price rally to yet new highs.

Throughout 2021, the Asian gas benchmark JKM prices had traded above the European TTF prices, driven by strong demand from heating, air conditioning, storage filling and environmental policy. This changed in the very last weeks of the year as Asian demand was weakening (China LNG imports even declined in December in yearly comparison) and TTF prices had finally surged higher than JKM (see figure 1 above). This resulted in LNG vessels headed towards Asia changing direction towards Western Europe and paired with milder weather forecasts the gas prices subsequently collapsed from 180 EUR/MWh to 65 EUR/MWh in just seven trading days by 31 December.

Not out of the woods yet for the year ahead

Despite weather forecasts mostly promising seasonal average temperatures for the remainder of the winter and LNG shipments to Europe increasing, there is no certainty that the downtrend in prices will continue. The first days of 2022 have already shown a strong rebound from the around 65 EUR/MWh lows for the month-ahead contract to above 90 EUR/MWh as market participants return from holidays and acknowledge the storage situation is still dire. We are operating in an overall inflationary environment amidst the green transition with high energy prices all around. It is now quite clear that the European gas supply remains rather scarce throughout the winter which will likely mean that for the upcoming summer season the situation is like last year where storages are depleted and demand for restoring is high throughout the year. This is reflected in the gas forward curve which at the current levels of 80 EUR/MWh for most of the months in 2022 shows that, even though hopefully the highest price peaks have already been made, we should not depend on the return to the historically accustomed levels of around 15-20 EUR/MWh within 2022.